As a self-confessed word nerd I’m somewhat partial to discovering and collecting word trivia – I only wish that pub quizzes had a compulsory round on the subject (I might actually have a chance of answering some questions then!). Anyway, I thought I’d pull together a few of my favourite titbits of word trivia to share with you here. 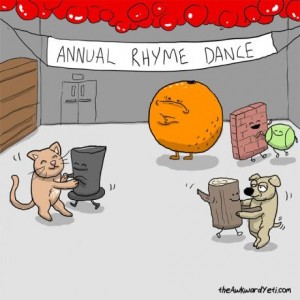 each word listed here hides a little known quirk or bizarre piece of trivia that elevates it from the rank and file.

To avoid needless repetition, all of these items of word trivia relate to the English language; I’ve no doubt that their ‘records’ would be surpassed in many other languages.

Abstemious contains all five vowels in the right order, as does facetious.

The word bed looks like a bed with the vertical posts representing the headrest and footrest at either end.

At seven letters long, billowy is one of the two longest non-scientific words to have their letters arranged in alphabetical order; the other is beefily. Six-letter words sharing this self-alphabetising property include abhors, accent, almost, chintz, effort, and glossy. In contrast, the longest word with its letters in reverse alphabetical order is spoonfeed.

Bookkeeper is the only word containing three consecutive repeated letters.

Provided it’s written in upper case, CHECKBOOK is the longest word with a line of horizontal symmetry. Other examples include CODEBOOK, COOKBOOK, EXCEEDED and ICEBOX.

Dreamt is the only English word that ends in the letters -mt.

The number four has four letters, making it the only self-enumerating number.

“Go!” is the shortest complete sentence.

Each letter of the word happenchance is used twice, with none left over – making it the longest non-scientific word composed entirely of repeated letters. Other examples include couscous, intestines, signings and teammate.

Intransigence is the longest word that becomes a palindrome when spelt out in Morse Code: ··–·–·–··– –······– –··–·–·–·· Other Morse palindromes include bottommost, hairballs, protectorate and sopranos.

No word rhymes perfectly with orange – or month, purple or silver.

Queue is pronounced the same, even if you remove all the letters but the first one.

The 9-letter word screeched is most commonly cited as the longest one-syllable word, but it’s not the only one: others include scratched, scrunched and stretched.

The word set has the most meanings with 464 definitions listed in the Oxford English Dictionary. Its nearest rivals are run, go, take and stand.

Stewardesses is the longest word that can be typed with only the left hand on a QWERTY keyboard.

If you rotate the word SWIMS, all in upper case, 180 degrees, it will still – more or less – read SWIMS, making it the longest rotationally symmetrical word.

Somewhat ironically, the 10-letter word typewriter is one of the longest words that can be spelt using only the top row of letters on a QWERTY keyboard; others include perpetuity, proprietor and repertoire.

Tremendous is one of only four words that end in -dous; the others are hazardous, horrendous and stupendous.

All 15 letters of the word uncopyrightable are different, making it one of the two longest words with no repeated letters; the other is dermatoglyphics, which is the study of skin markings.

Which of these is your favourite item of word trivia? Any that were new to you? Any others that I should have included? Do share in the comments below.