Coin it in with these 23 financial idioms

If you’ve been following my blog, you’ll be familiar with my idioms series. This features everyday phrases and sayings in the English language that have strange meanings – and often even stranger origins.

Each post in the series focuses on a different topic. Today it’s the turn of financial idioms and phrases, courtesy of the good folk over at Vouchercloud.

I’ve listed below the individual idioms and their modern meanings. It might not surprise you to discover that a ‘gravy train’ has nothing to do with roast dinners. Or that ‘making a mint’ won’t actually help freshen your breath.

If you’re curious about the etymology behind any of the financial idioms shown here, you can discover their origins along with some slang money-related words such as ‘monkey’ and ‘wonga’.

A bird in the hand (is worth two in the bush) = be satisfied with what you have, rather than taking a risk and potentially losing out entirely

Ballpark figure = an educated guess at a figure; a rough but considered estimate

Breadwinner/Bringing home the bacon = someone who works and earns money for their family; typically the sole or primary earner

Break the bank = use all of your money; spend everything

Cash cow = something that continuously and consistently earns, and will earn, good money

Coin it in = make a good profit; earn a large salary or wage

Feel the pinch = be under financial hardship

Feeling flush = be in possession of a lot of money; suddenly feel rich or extravagant 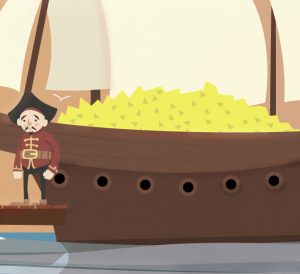 Have a whip round = an impromptu collection of money from a group, often for an informal purpose like a birthday gift

If you pay peanuts, you only get monkeys = poor pay will only ever get you poor workers

Living on the breadline = barely scraping by; surviving on minimal income

Make a mint = be making a lot of money, often quickly or efficiently

Money for old rope = gaining money for nothing; being rewarded for very little effort

Paying through the nose = pay a high price; pay dearly for something

Pretty penny = a large or considerable amount of money

Put paid to = finish something off; put a stop to something

Which of these financial idioms do you like best or use most often? Any others that you’d care to add? Please let me know in the comments below.