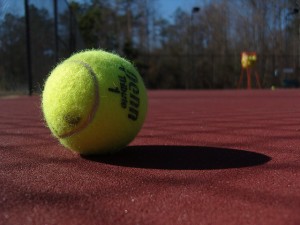 On the eve of Wimbledon – my favourite sporting event of the year – it seems fitting to write a blog about tennis.

Like any sport, tennis has its own lingo but rather than focus on the common terminology, I thought I’d dig around a bit to find some of the lesser-known terms associated with the game.

I was surprised by how many tennis terms I’d never heard of before, let alone used in my playing days. And what struck me in particular was how many of them have a food connection!

So, now you can talk like a tennis pro by brushing up with this glossary of terms.

Alley: the area of the court between the singles and doubles sidelines, also known as the tramlines

Bagel: a colloquial term for winning/losing a set 6-0 (the shape of the zero being reminiscent of a bagel’s round shape)

Blue collar tennis:  when a player is under pressure in a match and needs to work extra hard to win points

Breadstick: a colloquial term for winning/losing a set 6-1 (the shape of the ‘one’ supposedly reminiscent of a breadstick)

Brutaliser: smashing the ball directly at the opponent

Can opener: a serve hit by a right-handed player with slice, landing on or near the intersection of the singles tramline and service line in the deuce court (advantage court for a left-handed player)

Dedans: an open gallery for spectators at the server’s end of a real tennis court

Daisy cutter: a low shot that skids or takes a very low bounce, usually due to adding slice

Dink shot: a soft dipping shot that just clears the net, often used in doubles, especially on return of serve

Dinner set: ‘awarded’ to a player who’s achieved a career Grand Slam and a runner-up finish at each of the four Grand Slam tournaments

Egg: when the ball is struck high enough to obscure its visibility

Ghost in to the net: to approach the net from the baseline while the opponent is busy retrieving a ball and therefore distracted

Golden set: a set of tennis that is won without dropping a single point

Grinder: another name for a baseline player

Hail Mary: an extremely high lob, used for defensive purposes when out of position

Jam: to hit the ball straight into the opponent’s body, forcing an awkward or weak return

Junk ball: a random slow and/or flat shot, designed to upset the rhythm of the game

Paint the lines: to hit shots that land as close to the lines as possible

Puddler: a player who hits a lot of chip shots and drop shots

Sledgehammer: a two-handed backhand winner down the line

Spank: to hit a groundstroke flat but with a lot of pace

Stopper: a player who won’t win or go far in a tournament but is good enough to knock out a top seed

Throat: the thin area of a racquet handle, where it meets the head

Trampolining: striking a ball flat with a racquet strung at a very loose tension, resulting in a shot with extremely high velocity

Tree: someone who is playing much better than normal

And here’s a bonus fact for you. Tennis is the only sport that uses love for zero. It’s believed to come from the French word l’oeuf (egg) and was used because an egg’s shape is similar to zero (0).

(image via under Creative Commons)