Bye-bye blog subscribers… why I had to let you go 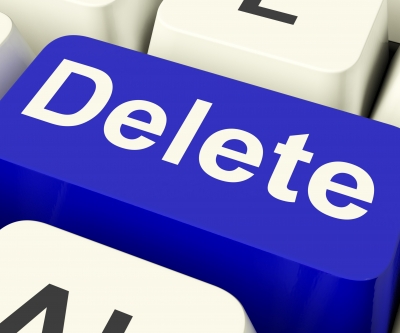 Go on any marketing for small businesses course and you’ll no doubt be told that building up an email list is an essential step to growing your business.

So why have I recently deleted my blog subscribers from my website after taking four years to accumulate them?

Some might call it drastic; I call it liberating.

Since starting my blog back in May 2014 I’d acquired the total sum of 51 subscribers.

Not surprisingly the first few were family and friends, who I coerced into subscribing to get my blog off the ground.

Most of the others then signed up during the first 12 months when my blogging activity was at its peak (once a week, without fail). The remainder trickled in at sporadic intervals – often a few months apart.

In blog following terms, it wasn’t exactly a number to shout about from the rooftops. Nor was it likely to have a major impact on my business: it didn’t result in much engagement (in the form of comments or shares) or any direct enquiries.

And without checking my Google Analytics – I know, I know, it’s somewhere on my to-do list – I don’t even know how many of these subscribers even clicked through on a regular basis to “read more”.

Something not quite right

A year ago I wrote a post about losing my blog mojo. Despite my small surge in enthusiasm at the time it didn’t come back properly, as evident by the fact I only published eight posts in the following 12 months.

Now, don’t get me wrong: I’m a big believer of the many benefits of business blogging.

And I don’t suffer from a shortage of ideas either. In fact, I have numerous half-written drafts waiting in the wings to be completed. Plus several more ideas bubbling about in my head.

So why have I been experiencing a blockage when it comes to my blog?

The fear of being judged

After some soul-searching I realised that the knowledge that every new post would ping immediately into the Inbox of the named subscribers – including a few fellow copywriters and editors – was putting me off!

Side note: I should point out here that I’m an overthinker. I overanalyse. And I’m a perfectionist. Great for my proofreading work but not so helpful here.

Instead of simply adopting the “publish and be damned” approach, I would therefore invariably question if subscriber A would enjoy my post. Or if subscriber B would think it an odd choice of topic.  Worse still, if subscriber C would find fault with it.

And so on until I’d simply end up talking myself out of writing it.

But there was another reason for deleting all my blog subscribers…

In order to comply with the new General Data Protection Regulation (which comes into effect on 25th May) I would have had to ask my existing subscribers to re-confirm their consent by opting in again.

In itself this wouldn’t have been a particularly onerous task. But it forced me to take stock and weigh up the effort versus the reward.

Based on the emails popping into my Inbox on a near daily basis, most companies clearly value their mailing lists and are prepared to jump through the necessary hoops in order to become GDPR compliant.

For me, the opposite was true: having a blog subscription list was having an adverse effect on my creativity and my output.

Only time will tell…

Who knows whether the absence of blog subscribers will actually have an impact on my blogging – either in terms of frequency or subject matter.

What I do know is that I feel a sense of relief. It’s something that had been hovering in my sub-conscience for a while, but good old GDPR served as the catalyst for me to take action and press ‘delete’.

Consequently I now feel free to blog about what I want, when I want.

It may well be the making of my blog. Or it make absolutely zero difference. But it has to be worth a try.

I will of course continue to share my new – and sometimes old – posts on social media. And it’s quite likely that some of my former subscribers will see them on there.

However, that’s fine. That’s random readership rather than targeted. For me, that makes all the difference.

What do you think?

Have I gone completely bonkers? Or can you see where I’m coming from? If you’ve also been experiencing blogging inertia, do you think you might follow my example?

Do let me know in the comments below. I’d love to hear your thoughts.

P.S. If you were one of my former blog subscribers, I’d like to take this opportunity to thank you for your support over the years and hope that you understand my decision.