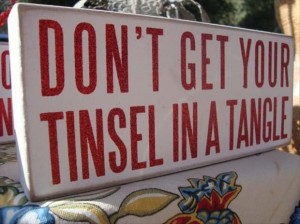 Continuing my series of blog posts on idioms, this latest one unwraps a few of the most popular Christmas idioms and other holiday-related phrases and sayings.

For those of you interested in word origins, I’ve also included links to extra information where I could find it.

‘Tis the season to feast on Christmas idioms

Bah! Humbug!  = first used by Ebenezer Scrooge in Charles Dickens’ “A Christmas Carol”, this is sometimes said by people who aren’t fans of Christmas when confronted with holiday well-wishers

Be no angel = sometimes behave badly

Christmas comes but once a year = used as an excuse for over indulgence, whether on food or on gifts, on the basis that it doesn’t happen often

Deck the halls  = decking (or decorating) one’s hall with branches from a holly tree is an old tradition; the popular carol of the same name began as a Welsh tune dating back to the 16th century

Don’t look a gift horse in the mouth = don’t be ungrateful when you receive a present, even if it’s not exactly what you wanted

Good things come in small packages = the size of a gift doesn’t determine what’s inside; in the same way a small person may have a big heart

It’s the thought that counts = it’s the kindness behind an act that matters, however imperfect or insignificant it may be 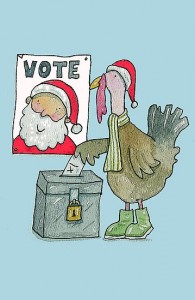 The more the merrier = the more people or things there are, the better a given situation will be

‘Tis the season to be jolly  = taken from a Christmas carol, this phrase serves as a reminder to put on a happy face over the festive period (‘Tis is an old method of contracting it and is, but is rarely used these days)

Trim the tree  = nothing to do with cutting, this is an old reference to decorating a pine tree with ornaments, lights and other glittery bits

White Christmas = when it snows at Christmas time (something which we can place bets on in the UK, as it happens so rarely!)

Written in the stars = intended to be, destiny

Hopefully this collection of Christmas idioms will have helped get you in the festive mood, if you weren’t already. Any other seasonal idioms or sayings that you’d care to add?

(images via and via)