↓ Skip to Main Content
Home › Freelancing › I’m A Copywriter… Get Me Out Of Here!

I’m A Copywriter… Get Me Out Of Here! 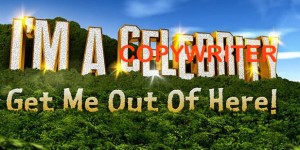 To coincide with the latest series of I’m a Celebrity… Get Me Out Of Here, I thought it would be fun to compare life as a copywriter to that of a participant on this popular reality TV show.

Drawing on my 18 years as a freelance copywriter and my dedication to the show, I feel fairly well equipped to comment…

Taking the leap of faith into the unknown

There’s no denying that jumping from a plane requires nerves of steel and, more often than not, a nudge from behind. This is something I also needed before taking the plunge to start my own business after the relative security of working in-house for large organisations. But, as with most of the celebs, it was a life-changing experience for me and one that I would gladly do all over again.

Navigating through the jungle

The need to become up to speed with the business side of self-employment (tax, record keeping, invoicing, etc) can be likened to the contestants being dropped some distance from camp and having to make their way there in unfamiliar surroundings, while wearing unfamiliar gear. You might be out of your comfort zone, but you just have to get stuck in because that’s what you signed up for.

The first few hours in camp – with the celebs ‘negotiating’ over who’s going to get the best camp beds and adjusting to their temporary new ‘home’ – is a bit like setting up your stall as a copywriter. One of the first things you have to do is establish your copywriting rates: pitching them too high may mean not obtaining much work, but going in too low means you can end up working all hours for little return.

Getting on with fellow campers

One of the things many of the celebrities struggle with is being in close proximity 24/7 to an assorted bunch of strangers – from all walks of life. Over the years I’ve worked with some really lovely people. But I’ve also encountered one or two weirdos, as well as several clients who were ‘difficult’ to work with. However, you soon learn to grit your teeth, get on with it and think of the cheque at the end. And at least I don’t have to listen to them snoring at night!

Coping with the hunger

Every year, the contestants on the show complain about how hungry they are – often reduced to meagre rations of rice and beans. But at least they know that, whatever happens, they’ll soon leave the jungle and head back to the 5* hotel. As a freelance copywriter I don’t have that luxury, as I never really know where my next ‘meal’ (job) is going to come from. But I’ve learnt to enjoy the ‘feasts’ and not worry too much about the ‘famines’.

Clearly NOTHING a copywriter is asked to do can match the sheer horror of the infamous Bushtucker Trials! Although my job doesn’t involve any horrible eating challenges, close encounters with creepy crawlies or being shut inside dark spaces, I have – on occasion – accepted ‘opportunities’ that I didn’t really want to do. One that springs to mind was being asked to do a presentation to a local networking group; I was positively bricking myself beforehand, but it actually went surprisingly well.

The celebs rely on public votes to keep them in the show and also to decide who’s going to be crowned the new King/Queen of the Jungle. As a copywriter I rely on the support and approval of my clients for repeat work and also referrals. In both cases, we have to win people over the hard way.

So there you have it! Any additional comparisons between a copywriter and an I’m A Celebrity contestant you’d care to add?