Go potty over this cracking collection of pottery phrases 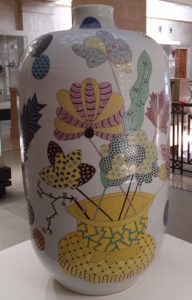 Having previously written posts about baking, cooking and dancing related idioms to tie in with popular TV shows, it seems only right to turn to pottery as we approach the final of this year’s The Great Pottery Throw Down.

So, let’s crack on to discover which well-known pottery phrases I unearthed…

What a lot of pots

Fusspot = a person who fusses unnecessarily

Go potty = become irrational or crazy; become very excited or enthusiastic (about something)

Go to pot = be ruined; deteriorate through neglect

In the melting pot = likely to change; in the process of changing

Take potluck = eat whatever food has been prepared or is available

Jug-eared = having ears that stick out markedly, resembling the handles of a jug

Not for all the tea in China = not at any price

On the tiles = out having a wild or enjoyable time, not returning home until late

Asleep at the wheel = not attentive or alert; inactive

Fifth wheel = a superfluous or unnecessary person or thing

Give someone the slip = evade or escape from someone

Let something slip = reveal something inadvertently in the course of conversation; fail to take advantage of an opportunity

Let something slip through one’s fingers = lose hold or possession of something; miss the opportunity of gaining something

Slip up = make a blunder or mistake; fall over

Throw down the gauntlet = issue a challenge to someone

Get cracking = (start to) act quickly and energetically

Scratch the surface = deal with a matter very superficially

I hope you’ve enjoyed this mixed bag of pottery phrases, idioms and sayings. Do let me know if I’ve missed any obvious ones and I’ll be glad to add them.

To finish off, here’s an old pottery quotation that caught my eye:

A vessel is formed from a lump of clay with care, however, it is the empty space within the vessel that makes it useful. – Laozi