Brush up your curling lingo with this beginner’s guide 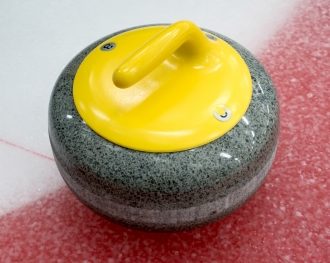 Losing the hammer. Blanking an end. Staying in the house. What on earth does it all mean?

It can only be one thing… curling lingo.

If, like me, you’ve been enjoying watching the British curling teams in action at the Winter Olympics, you can’t fail to have noticed the weird terminology used in the sport.

So to ease your bewilderment as well as my own, I’ve put together this handy beginner’s guide to curling lingo. You’re welcome!

First, let’s demystify some of the most common terms you’ll hear.

Blast = a shot delivered with heavy weight and at high speed, usually to remove several stones from play or to break up a cluster

Broom = the implement used to sweep the ice (brushes have almost completely replaced brooms, but the traditional name is still used)

Button = the centre (or bull’s-eye) of the house

Chip = a takeout that hits a stationary stone at an angle

Delivery = the process of throwing a stone

Extra end = if the score is tied after the set number of ends, extras are played until the tie is broken

Sheet = the elongated playing rink with targets at both ends

Stone (or rock) = a heavy, highly polished granite orb with a bent handle on the top

Depending on the desired outcome of each delivery, players will attempt one of several different throws. But with such a tiny margin for error, they don’t always succeed!

Freeze = to deliver a stone so that it comes to rest against a stationary stone, making it almost impossible to remove

Curling has several nicknames, the two most common ones being ‘Chess On Ice’ and ‘The Roaring Game’. Not surprisingly the former is due to the sport’s highly strategic nature. The latter, however, doesn’t relate to the shouts of the players to their teammates after the stone’s been thrown; it is in fact due to the sound a stone makes while sliding along the ice.

I don’t profess to be a curling expert – far from it – and this is by no means intended to be an exhaustive glossary of curling lingo. But hopefully it will serve to enhance your understanding of future matches. Rock on…

(image courtesy of Phil_Bird via FreeDigitalPhotos.net)