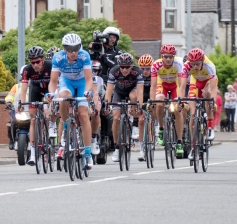 Inspired by the OVO Energy Tour of Britain 2018 cycle race, which whizzed through leafy Warwickshire this week, I thought I’d check to see how many cycling phrases, idioms or other expressions I could find.

Quite a few, as it turns out. Admittedly one or two are somewhat tenuous, because they could apply to other sports or activities… not just cycling. But I’ve included them anyway.

Along for the ride / For the ride = joining in with something for pleasure or interest, rather than because of any serious involvement

At a push = if necessary; in an emergency

Bums on seats = the paying audience at a venue with seating, e.g. a theatre or cinema

Come a cropper = fall heavily; suffer a defeat or disaster

Give someone the push = dismiss someone from a job; reject someone in a relationship

Hot on the heels of = in close pursuit of someone/something; immediately after some event

In the saddle = in office or control

Let something ride = take no immediate action over something

Squeaky bum time = the tense, final stages of a competition

Take someone for a ride = deceive or cheat someone

To wheel and deal = engage in political or commercial scheming

Toe the line = conform to an established standard or political programme

And I couldn’t write a post about cycling phrases without including the infamous proverb: “A woman needs a man like a fish needs a bicycle.”

In short, this feminist slogan humorously expresses the view that a woman can live her life perfectly well without a man. You can read the full story about its origins here.

Can you think of any cycling phrases that I’ve missed? Or do you have a favourite among the ones I’ve included?

My fave out of these has to be squeaky bum time, as that was a new one on me and appeals to my infantile sense of humour!

(Image courtesy of Phil_Bird via Freedigitalphotos.net)