Keeping up with the various spellings of Jones

You know that idiom that refers to comparing yourself to your neighbours as a benchmark for social class or material wealth? Whereby failure to ‘keep up’ with their practices or possessions is perceived as evidence of socio-economic or cultural inferiority.

How do you think it should be written? 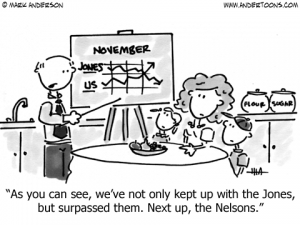 How to spell and punctuate Jones correctly

As a Jones myself (through marriage), I reckon I’ve seen pretty much all the spelling variants of my surname over the years – in emails, family Christmas cards and so on.

Here’s a quick reminder of the basic singular form:

✔ My name is Geraldine Jones

The plural is Joneses, with the addition of –es to indicate the plurality of a singular word ending in s, like in buses or dresses. Despite what many people seem to think, adding the oft-misused apostrophe does NOT pluralise it.

✖ Happy Christmas from the Jones

✖ Happy Christmas from the Jones’

✖ Happy Christmas from the Jones’s

✔ Happy Christmas from the Joneses

If in doubt, you could always stick with:

✔ Happy Christmas from the Jones family

So far, so good… hopefully.

When things start to get possessive

However, most of the confusion arises when people use (or try to use) the possessive forms, especially the plural possessive.

According to English style guides, singular possessives are formed with –’s and plurals with just an apostrophe, so the possessive of the singular Jones is Jones’s and of the plural Joneses is Joneses’.

✖ Have you read Bridget Jones Diary?

✔ Have you read Bridget Jones’s Diary?

✔ Have you read Bridget Jones’ Diary? *

✖ The Jones’s car is blue

✔ The Joneses’ car is blue (i.e. the car belonging to the Joneses)

* An acceptable alternative is to drop the second s in words ending in s, as in St Thomas’ Hospital instead of St Thomas’s Hospital.

The grammatically correct version of the well-known phrase is therefore “Keeping up with the Joneses” – it’s a standard plural form of the word, not possessive, therefore doesn’t require an apostrophe.

All in all, it’s a lot simpler if your surname is Smith or Brown!