A (not so) brief lesson in Latin abbreviations

As writers we’re often encouraged to keep things short and to the point.

Many of the abbreviations we rely on in everyday English have Latin origins. In fact, the word abbreviation derives from the Latin brevis meaning ‘short’.

But Latin abbreviations can be troublesome.

So here’s a quick recap to make sure you’re using them properly. Not just in the right context, but also with the correct spelling and punctuation.

The three most common Latin abbreviations

This is an abbreviation of the Latin phrase exempli gratia, meaning ‘for the sake of example’. A good mnemonic is ‘examples given’. Use it when you want to give one or more examples but not a complete list. “I love most kinds of chocolate, e.g. milk chocolate, dark chocolate and truffles.”

Short for et cetera, which translates in Latin to ‘and the rest’, this is handy when writing a list of things: “For Christmas she hoped to get jewellery, clothes, perfume, etc.” The implication here is ‘and so on’ or ‘and more’.

A common mistake is to add etc. at the end of a list that opens with e.g. This isn’t necessary because the very use of e.g. implies that the list is incomplete.

This doesn’t actually stand for ‘in essence’ (as many people assume). Instead, it’s an abbreviation of the Latin phrase id est, meaning ‘that is to say’, ‘namely’ or ‘in other words’. Use it when you want to clarify something or provide more precise information. “Shall we go to the new cinema, i.e. the Multiplex not the Odeon?”

A lot of people mistakenly interchange i.e. with e.g. If you find it hard to remember the distinction, try to remember this tip from Grammarly:

Where e.g. opens up more options, i.e. narrows them down.

Or you may find this infographic from Brightfive helpful: 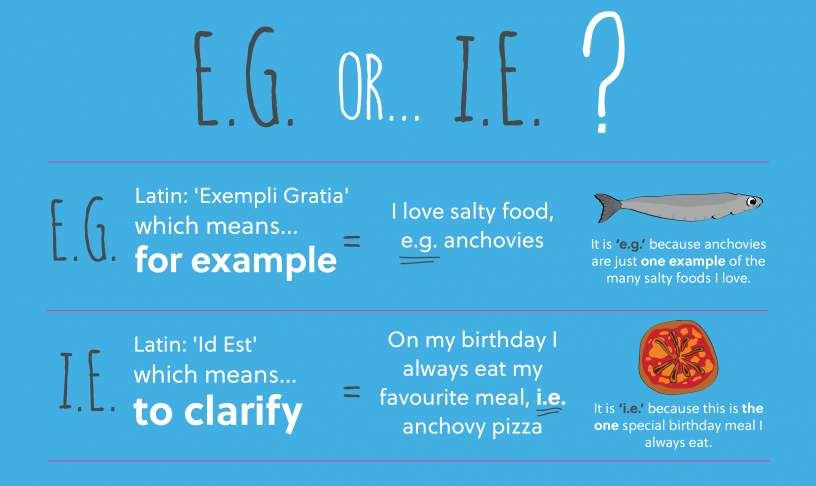 More Latin abbreviations to get to grips with

Here are a few more Latin abbreviations that you probably use quite often without necessarily knowing their etymology.

A.D. from Anno Domini, means in the Year of the Lord and is the system of dating used to indicate years since the birth of Christ.

A.M. / a.m., abbreviated from ante meridiem, refers to the time between midnight and noon.

cf. derives from the Latin word confer, although in spoken English it’s generally read aloud as ‘compare with’. Use it to draw attention to related ideas that provide additional arguments or further information.

CV, short for curriculum vitae meaning ‘course of life’, is a document containing relevant work experience and educational information. Another common term is ‘résumé’, although this is mainly used in American English.

et al. is short for et alii (masculine), et aliae (feminine) or et alia (neuter) meaning ‘and others’, and is useful when writing a list of people: “Harry, Liam et al. waved to fans from the red carpet.”

lb, from the Latin libra for scales, indicates a pound (or pounds) in weight.

MO from modus operandi means ‘method of operating’ and is usually associated with criminal behaviour.

P.M. / p.m., short for post meridiem, refers to the time between noon and midnight.

PS, abbreviated from post scriptum, means roughly ‘after what has been written’ and indicates addendums to otherwise completed personal texts.

QED is an abbreviation for the Latin phrase quod erat demonstrandum, meaning ‘what was to be demonstrated’; it’s written or said after a mathematical or philosophical argument to show that the proof is complete.

RIP is short for requiescat in pace, meaning ‘rest in peace.

vs. or v. is the abbreviation of versus, which actually means ‘towards or in the direction of’. Somehow it’s become mistakenly used in English to mean ‘against’, particularly for opposing sides in sporting events or legal disputes.

viz. originally stood for videlicet (z being a medieval Latin symbol for -et) and is normally pronounced ‘namely’ or ‘in other words’ when read out loud – making it a near-synonym of i.e.

With or without the full stop?

Advice on how to actually write Latin abbreviations varies according to which dictionary or style guide you refer to.

The spellings shown above reflect those of the Oxford English Dictionary, which – you could argue – is somewhat inconsistent. Other reference sources I looked at advocate using full stops (periods) for all of them.

In contrast, The Writer’s online style guide states that there is “no need for full stops” when writing eg, ie or any abbreviations, acronyms or initialisms.

As with most spelling variations, the main thing is to be consistent within a single document or piece of collateral such as a website.

Punctuation of Latin abbreviations is an even thornier issue.

You may have noticed that in the earlier examples there is NO comma following e.g. and i.e.

This is my personal preference as I think it looks cleaner and easier to read without. But many reference sources and grammar guides still recommend including a comma or full stop afterwards to make it clear that they are, in fact, abbreviations.

Daily Writing Tips explains that consensus seems to be in favour OF the comma in American usage but AGAINST it in British usage.

It concludes: “As with so many matters of punctuation, the writer’s best practice is to choose a style reference and follow its recommendations.”

Or it may well be that you have to follow the client’s style guide – whether you agree with it or not!

I hope you’ve found this recap of Latin abbreviations useful. Next time it’s the turn of some common Latin words and phrases, so do pop back.

[1] Famous quote from the long-winded Polonius in Hamlet.

4 comments on “A (not so) brief lesson in Latin abbreviations”