How to make less* mistakes in your writing 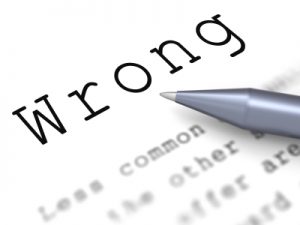 I recently overheard a radio news presenter refer to “less people” at a particular event.

The issue of whether to use less or fewer in a sentence is one that catches many people out.

This is confirmed by Oxford Dictionaries, which states: “It is regarded as incorrect in standard English to use less with count nouns, as in less people or less words, although this is one of the most widespread errors made by native speakers.”

So it seemed a worthy topic to delve into…

Look in any printed or online grammar guide and the advice for choosing between less or fewer is pretty straightforward:

To demonstrate, here are some examples of correct usage:

“With fewer daylight hours, I’ve less incentive to go out for a walk.”

“There was less noise on Bonfire Night due to fewer fireworks.”

Some people would argue that money can be counted. But it’s the coins, notes (and gold bars if you’re super rich!) that we physically count – not money itself, which is a mass noun and therefore uncountable..

You might think the same would apply to people as it’s a collective noun. But people is the plural of person, so the correct version is to say/write:

“Fewer people went to the conference this year compared to last year.”

What about numbers, time and distance?

English being English, there are some exceptions to the above. Less is used idiomatically with than + plural nouns in certain circumstances where there’s a notion of quantity.

“The university is less than three miles from the town centre.”

This is because we’re referring to total amounts (e.g. a single period of time or the overall distance) rather than individual units.

We also use less with numbers when they’re on their own, for example:

“The group shrank from 24 students to less than 15.” but “Fewer than 15 students turned up for the lecture.” 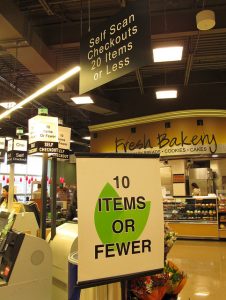 A classic error (often cited on social media) is found in the express checkout lane in supermarkets, where the signs in most stores say “10 items or less” instead of “10 items or fewer”. Some, like Tesco, even changed their signs to read “Up to 10 items” to appease the pedants and the language watchdog The Plain English Campaign.

However, it turns out that it might not be a grammatical faux pas after all…

According to Pocket Fowler’s Modern English Usage: “Supermarket checkouts are correct when the signs they display read 5 items or less (which refers to a total amount), and are misguidedly pedantic when they read 5 items or fewer (which emphasizes individuality, surely not the intention).”

So it looks like there’s no consensus on that one. I must admit that these signs have always irked me, as I assumed they were incorrect. Now I’m not so sure!

People rarely use fewer when they should be using less. By far the most common mistake is the other way around – as in the title* (which should, of course, be fewer mistakes because mistakes are plural and countable).

Hopefully that’s clarified the issue for you. Next time you’re pondering whether to use less or fewer, simply remember the basic rule:

For more top tips and handy hints, do check out some of my other grammar posts. Or let me know in the comments if there are any troublesome topics you’d like me to cover.