↓ Skip to Main Content
Home › Names › Crumbs… who’d have guessed there are so many names for bread rolls?

Crumbs… who’d have guessed there are so many names for bread rolls? 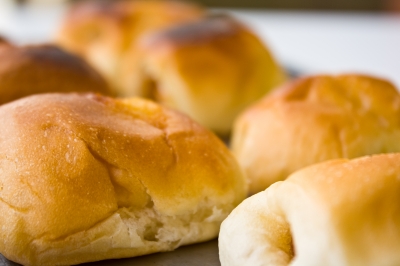 Following on from my previous post on names for plimsolls, attention now turns to what we Brits call the humble bread roll.

As I suspected, there’s a far greater variety of names for bread rolls than there is for elasticated footwear. But I wasn’t prepared for quite how many…

Origin of the bread roll

A roll is a small – usually round – loaf of bread. It’s believed that the first roll was created in the south east of England in 1581.

Bakers in different towns and cities used to name their bread rolls according to how they made the dough, the size of the rolls and how they baked them. Over time, however, these differences merged. As a result, many similar products are now grouped under one name.

Although universally recognised throughout Britain, the word roll is somewhat generic: it doesn’t explain the type of roll being referred to. So additional words are sometimes used to describe the shape and/or texture, for example:

According to Jonnie Robinson, a curator at the British Library who specialises in accents and dialects: “Bread was historically a generic term for any baked item and ‘cake’ and ‘loaf’ originally referred to the shape of that ‘bread’, with ‘cake’ usually being smaller and ‘loaf’ meaning ‘large bread’. There are numerous words for ‘bread roll’ in use around the country and this explains why some include the word ‘cake’.

It’s great to see so many of these historic and regional terms still in use and I hope bakers around the country continue to help preserve these local distinctions.

Go into any bakery or café today and try to order a cheese roll. Or a bacon roll. If you don’t use the correct local term, there’s a good chance you’ll be corrected or even given the wrong item. I’d certainly never heard of a batch before until I came to nearby Coventry as a student.

My original intention when starting to write this post was to list the popular names for bread rolls by region. Or even to include a map. But online reference sources vary so much that I decided that was just asking for trouble!

A recent tweet I spotted highlighted this very conundrum: 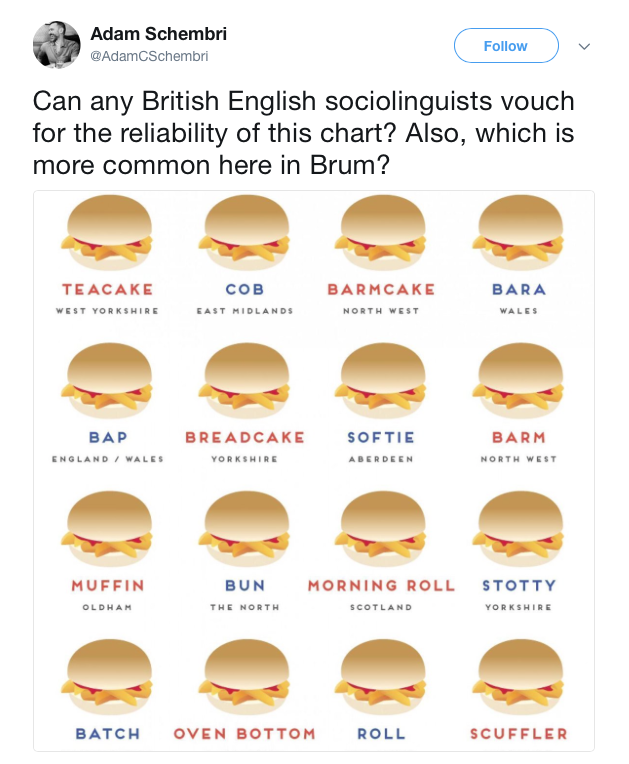 The ensuing replies threw up multiple conflicting opinions from all corners of the UK and further afield (including the fact that most people refer to the image shown here as a chip butty).

So instead I thought I’d present an alphabetical list of the 21 variants I’ve found so far:

If you’re interested in delving further into lexical variations for bread, you might like to check out this mapping project by Linguistics and English Language undergrad students at The University of Manchester.

What do you call bread rolls where you live? And is that different from where you grew up?

I very much doubt if the above list is definitive, so if you have any additional names for bread rolls please do let me know in the comments below.

(Image courtesy of sritangphoto via Freedigitalphotos.net)

8 comments on “Crumbs… who’d have guessed there are so many names for bread rolls?”