↓ Skip to Main Content
Home › Names › Daps, pumps or plimsolls… what do YOU call your canvas shoes?

Daps, pumps or plimsolls… what do YOU call your canvas shoes?

A recent Twitter chat with a graphic designer down in Bristol (near my home town of Bath) reminded me of the different names we use for everyday objects. In this case it was footwear. Or, to be precise, canvas shoes.

A dap by any other name

He’d posted a photo of some rather snazzy canvas lace-ups, which he referred to as daps.

As someone who grew up in his neck of the woods, his choice of wording made me feel rather nostalgic for my infant school years. 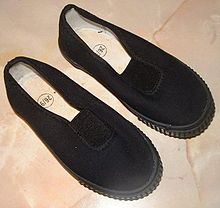 One of my fond memories from that era is the infamous ‘dap bag’ – a drawstring canvas bag used to transport our black elasticated shoes into school for PE lessons.

Fast forward XX number of years and I no longer wear this particular type of shoe (even to the gym). But I do wear other variants of rubber-soled canvas shoes, which these days I call pumps.

This is probably because I’ve settled ‘up North’. Well, to Southerners the Midlands qualifies as the North, seeing as it’s past the Watford Gap!

During our chat I then discovered that he had moved ‘down South’ from Lancashire, where he’d grown up calling them pumps. So he’d switched from pumps to daps, which was the exact opposite to me.

This kicked my nerdy brain into overdrive and made me want to find out more. Were we representative of our regions? Or did we just like to be different?

A quick search online took me to the good old Wikipedia page, on which I discovered that: 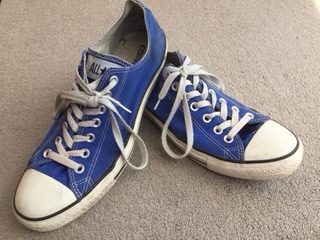 What we call this type of footwear largely depends on where we live. The most common regional variations are:

So it would appear that plimsolls are the original word, but hardly anyone calls them that these days.

And my limited research corroborates that both of us have stayed true to our regional preferences – subconsciously changing our choice of word, most likely to fit in with our peers.

Outside the UK, the names for canvas shoes are even more widespread:

So, I’m intrigued… what do you call your canvas shoes? Is that the same as when you were growing up? Or have you also made the switch as you’ve moved regions?

70 comments on “Daps, pumps or plimsolls… what do YOU call your canvas shoes?”