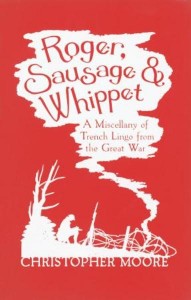 This week marked the centenary of the start of the First World War on 4th August 1914. Although none of the brave soldiers who took part are with us any more, their legacy lives on in countless ways, including social changes, our literature and our language.

You might not realise it, but numerous English words and phrases – many of which we use every day – hark back to that time.

So, for my own personal salute to all those who gave their lives for us, here’s a selection of WW1 trench lingo.

Egg (a hand grenade or bomb)

Ginger (any man called Jones, whether or not he was a redhead)

Hot cross bun (an ambulance, from the red cross on its side)

Ink slinger (a clerk in uniform, also a pen pusher or quill driver)

Lingo (language, especially as spoken by a foreigner – from Latin ‘lingua’)

Mess (the place where soldiers ate)

Ooja-cum-pivvy (a gadget or box of tricks, any military thingama-jig)

Tommy (a private soldier in the British army)

Whippet (a small, light tank with a top speed of 8mph)

This is just a brief insight into the wealth of trench lingo invented or borrowed during WW1 (extracted from ‘Roger, Sausage & Whippet’ by Christopher Moore).