↓ Skip to Main Content
Home › Idioms › Whatever the weather, we’ve an idiom for it

Whatever the weather, we’ve an idiom for it 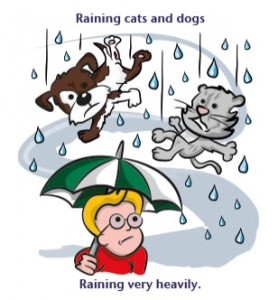 We Brits talk about the weather a lot.

It dominates our everyday conversations and is always a reliable opener for small talk.

It’s not surprising, therefore, that a number of weather-related idioms have crept into the English language over the years.

As a word nerd and linguist, I enjoy finding out where words and phrases come from, together with their associated meanings.

This is the first in what will hopefully be an enlightening (no pun intended!) series of blog posts on idioms.

What exactly is an idiom?

Before we start, a quick look at what the word “idiom” actually means.

The Oxford Dictionary defines an idiom as “A group of words established by usage as having a meaning not deducible from those of the individual words (e.g. over the moon, see the light).”

Grammar Girl’s definition is somewhat clearer: “Idioms are phrases that don’t mean what they literally say, but have meaning to native speakers.”

For example, most native English speakers understand that under the weather means that someone is feeling unwell, but this is unlikely to be grasped by a foreigner carrying out a literal translation of every word in the phrase.

Many idioms used today had a more literal meaning in the past, which is how they came about in the first place.

Under the weather is believed to originate from a time when boat travel was common. Passengers who were feeling seasick during a storm would go below deck where the motion was less intense; hence they were literally ‘under the weather’ that was occurring above deck.

Another common maritime idiom is sailing close to the wind, which is used when someone is doing something that is dangerous or borderline legal or acceptable. Although the etymology is clear – to sail a boat as near as possible to the direction the wind is coming from – what is less evident is when or why it developed negative connotations.

As you would expect, make hay while the sun shines has farming origins dating back to Tudor times. Without the advantages of modern machinery and weather forecasting, mediaeval farmers knew that it would take several days to cut, dry and gather in their hay, so they had to seize a dry spell. The sense is still the same – making the most of the chance to do something while it lasts – but it is now applied more generally.

Random idioms about the weather

However, not all idioms have such clear historical sources but have simply evolved over time without any logical explanation.

Of these, the strangest weather-based idiom must surely be it’s raining cats & dogs to signify it’s raining very heavily. Although there’s no definitive origin, the Phrase Finder does provide a likely derivation along with numerous fanciful ones.

A few other common idioms are:

Have I missed out your favourite weather-related idiom? If so, share it in the comments below. Alternatively, let me know which group of idioms you’d like to see covered in a future post.

2 comments on “Whatever the weather, we’ve an idiom for it”