Get to grips with this graphic list of writerly words 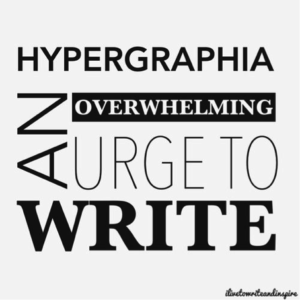 As a standalone word, a graph is a diagram showing the relation between variable quantities – usually measured along a pair of axes at right angles. In Linguistics, it refers to a visual symbol representing a unit of sound or other feature of speech.

But it also appears in a combined form as a root of many other words. Most of these appear in everyday English, while others are quite rare.

The origin is the Greek graphē meaning ‘writing, drawing’. It’s not surprising then that most of the words it appears in denote something written or drawn in a specific way, or an instrument that records.

So, off the top of your head, how many words can you think of with graph as their root?

The list below isn’t meant to be definitive, but it contains nearly 50…

Words with ‘graph’ as their root

autograph: a signature of a famous or admired person

grapheme: the smallest meaningful contrastive unit in a writing system (as used in Linguistics)

graphic: of/relating to visual art; of/in the form of a graph; giving vividly explicit detail; a graphical item on a screen or stored as data

graphicacy: the ability to understand maps or graphs

graphics: the products of the graphic arts; the use of diagrams in calculation and design; visual images produced or manipulated by computer processing

graphite: a grey, crystalline form of carbon used as a solid lubricant, in pencils or in nuclear reactors

graphology: the study of handwriting, primarily to infer a person’s character

graphomania: a mania for writing

graphospasm: writer’s cramp, when composing the old-fashioned way with a pen or pencil

hypergraphia: an overwhelming desire to write (a genuine mental condition when used in its specific medical sense)

infographic: a visual representation of information or data, e.g. as a chart or diagram

lexicographer: a compiler or writer of a dictionary

monograph: a detailed written study of a single specialised subject or an aspect of it

photograph: a picture made using a camera

pictograph: a pictorial symbol for a word or phrase (the earliest known form of writing, with examples discovered in Egypt and Mesopotamia from before 3000 BC)

seismograph: an instrument that measures and records details of earthquakes

And then there are all the words ending in –graphy, which fall into three main camps.

Some relate directly to writing, whether that’s the techniques used or the subject matter addressed. Others relate to the production of images, graphs or diagrams. Plus there are numerous variants meaning a descriptive science or study (far too many to include them all here).

bibliography: a list of sources referred to in a particular work

blogography: the expression of self through writing in the blogosphere

calligraphy: the art of decorative handwriting

cartography: the science of drawing maps or charts

chirography: handwriting; the art of fortune telling by examining the hand

cryptography: the art of writing or deciphering coded messages

epigraphy: the interpretation of ancient inscriptions

ethnography: the study of different peoples and cultures

fauxtography: misleading presentation of images for propagandistic or otherwise ulterior purposes (blend of faux and photography)

geography: the study of the earth’s physical features and their relation to human populations

hagiography: a biography idealising its subject

haplography: inadvertent omission of a letter or letters in writing, e.g. mispell for misspell

holography: the study or production of holograms

iconography: visual images and symbols used in a work of art

orthography: the act or study of correct spelling

palaeography: the study of ancient writing

pasigraphy: a universal system of writing, using characters or numbers rather than words

punctography: a system of writing using dots (as in Braille)

radiography: the production of images by X-rays, etc

steganography: hiding a message so that only the sender and receiver know of its existence, e.g. using invisible ink

tomography: a technique for producing a cross-section image of the body

topography: the arrangement of physical features of an area

typography: the process of setting type; the style of printed matter

The word graffiti comes from the Italian graffio, ‘a scratch’. This also gives us sgrafitto – a pottery decorating technique produced by scratching through a surface to reveal a lower layer of a contrasting colour.

Hopefully you’ve discovered a few new interesting words with ‘graph’ as their root in amongst this lot. Any major ones I’ve missed?